The female octopus, sp. Octopus briareus, with whom I have been conducting basic training, has recently laid eggs;  marking the final stage of a female octopuses rather short life cycle. I was initially tuned into the fact that she may be approaching the end when she stopped responding to her target-trained feeding times. In the several months I have cared for her, she was generally fed 1 chunk of frozen/thawed shrimp, scallops or marine fish on a nightly basis after responding to the presence of her target stick. Almost without exception, she would eagerly come out of hiding the moment I opened the lid of her tank and put in the target stick. Then she would jet over and grab the target, which would be exchanged for her food using stainless steel tongs; though retrieving the target from her was seldom easy – she has quite a grip!

(Pixelated picture of targeting can been seen below – taken from YouTube Video http://www.youtube.com/watch?v=oO7o1Ih-BOk) 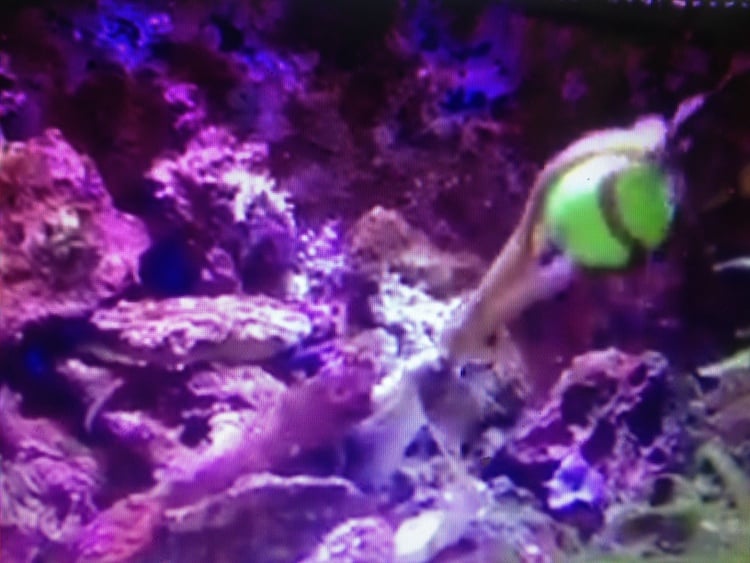 I noticed a rather quick decline in her willingness to partake in previously trained targeting exercises, and was surprised by how quickly she went from a relatively night-active and extremely food motivated animal to a reclusive cephalopod with zero desire to partake in targeting exercises, or eat at all for that matter. For the first week or so, I still offered her frozen bits of food (without the use of the target) on a nightly basis. This was largely unsuccessful, and while she would touch the food I put near her den, she would not eat it. I have since cut back such offerings to once every three days; I don’t expect her to take the food, but feel better knowing she has the option to should she decide she’d like to eat. A picture of one of her eggs is below – I suspect she laid many more, likely in clusters, but this lone egg was the only one i’ve been able to find so far. Once she dies, i’ll do some more investigation to see if I can find any others. These eggs are almost certainly infertile, she’s never come into contact with a male in the many months i’ve had her. 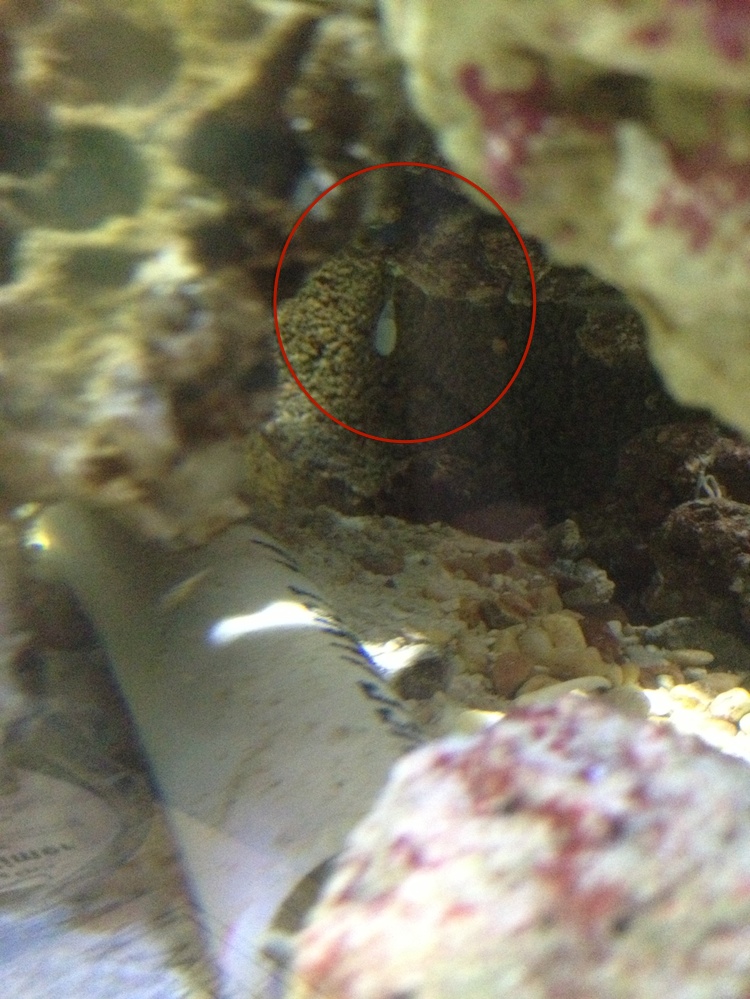 My past experience with cephalopods was with a senescent male Caribbean Reef Octopus (O. briareus); whose behavior at the end of their life cycle is markedly different than that of a females. Senescent males tend to be quite active; often at odd/uncharacteristic times of the day. Like females, males will generally refuse food offerings when they’ve approached the end of their life cycle. The male I worked with in the past also exhibited a decline in his ability to control his chromatophores; the pigment sacs which coleoid cephalopods (Octopus, Squid and Cuttlefish) use to change colors. The movement of both the male and the female are significantly less coordinated than in early stages of experimentation. Other characteristics of a senescent octopus, but which have not yet been observed in my specimens, include a retraction of skin around the eyes and un-healing lesions on the body (1). Many in the cephalopod husbandry circle have also noticed that brooding females engage in ‘autophagy’ also referred to as self-cannibalism, which generally entails a female eating her own arms (3).

While it is always upsetting to lose an animal, particularly one who i’ve invested many hours into training and bonding with – I do take comfort in the fact that she was well cared for and lived a complete life cycle in captivity; denoted by her laying eggs. Her body will be donated to one of the top veterinary programs in the US; at Colorado State University, where a post-mortem surgery will be performed. Her remains will provide training veterinarians experience which may be applicable to the husbandry of cephalopods in captivity elsewhere. While the removal of the optic lobe and/or severing of the optic nerve would result in a blind cephalopod, there have been suggestions made that doing so may increase the longevity of captive specimens. 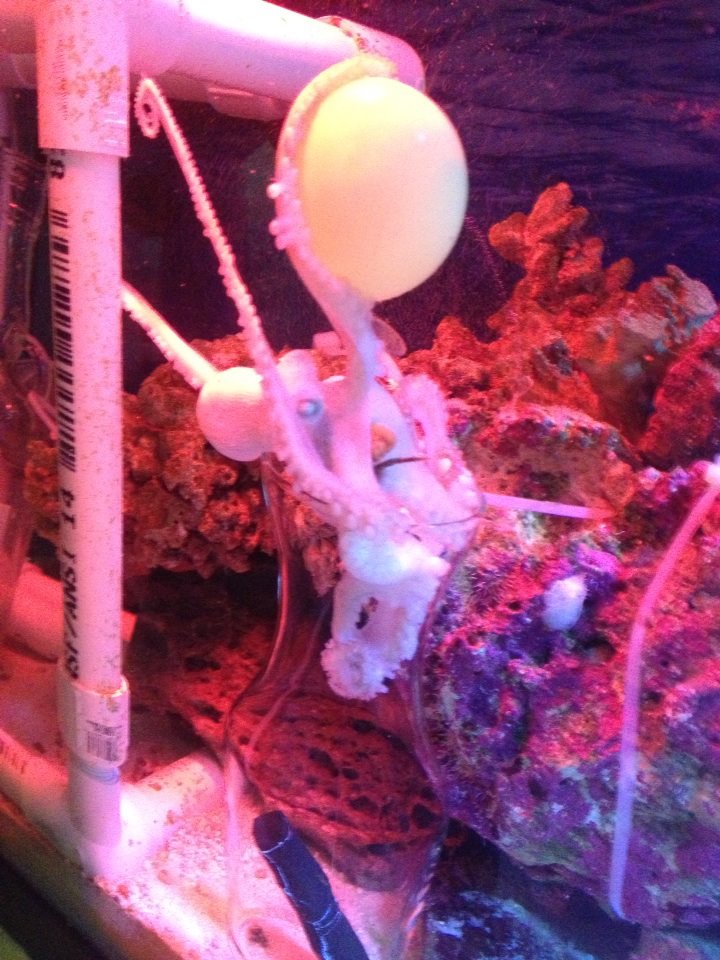 I take animal husbandry extremely serious, and view training and enrichment as an absolutely essential part of any captive animals care. In the several months that I had this octopus – she learned to open jars containing food, associate her target stick with food and was frequently given BPA-free plastic toys to investigate. Typically, i’d have to retrieve them from her rock den when it came time to switch them out for a new toy. Her tank had an over-spec protein skimmer, an over-spec canister filter with UV sterilization component and several circulation pumps. Biweekly water changes of 20 percent were carried out without exception, and the condition of the water she lived in was consistently excellent.

I hope to continue cephalopod research when she does pass, and am considering an attempt to replicate a recent cuttlefish study out of the University of Caen Basse in Normandy, France (2). Their research suggests that cuttlefish may learn from environmental cues while still in their eggs. This experimentation, with the species Sepia officinalis, yielded quite exciting information about cuttlefish cognition. Those cuttlefish developing in an environment with baby crabs present preferred to eat the baby crabs upon hatching; while those developing in an environment without crabs preferred to eat shrimp – which would be a more commonly seen wild diet for cuttlefish hatchlings. I plan to do some further research into the matter, and would like to replicate the study with a different species of cuttlefish – Sepia bandensis. More information on this to come.