On Tuesday April 30th, I received an Octopus briareus female with whom I plan to conduct behavioral and cognitive research. The specimen came missing a few arms, however the third arm on her right side was in tact and appeared to be homologous to the other arms in both its length and width; suggesting it was not the hectocotylus of a male octopod. Luckily for her, octopods have an astounding ability to regenerate lost limbs. Such an ability is extremely useful when in the presence of swift, effective marine predators; especially considering the octopod is lacking an external shell to protect itself. I will try to consistently take photographs of the regenerating arms, as I imagine a time-lapse of her arm regeneration photos would be quite interesting. Below is a picture of the cephalopod eating a peppermint shrimp on her first night with me. 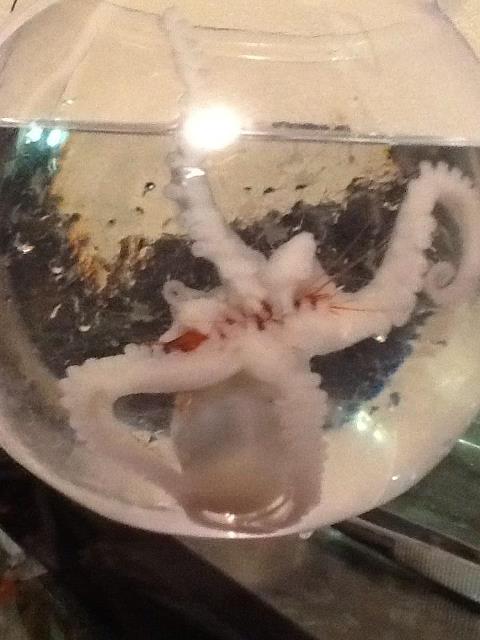 Today, I will attempt to explain some of the captive husbandry topics associated with the clever cephalopod under my care and begin to touch on the ways I plan to test the animals ability to learn and associate items with abstract concepts (feeding schedule, handling, company, etc.).

Salt Content– The measurement of salt content, or salinity, of water has traditionally been carried out using a device known as a hydrometer; though a more expensive and effective tool known as a refractometer has been growing in popularity among aquarists. Salinity refers to the amount of salt dissolved within the water, and directly affects the ‘specific gravity’ of the water. Typically, for a marine invertebrate tank, a specific gravity of 1.023-1.026 is preferred; if using a refractometer, the measurements are often given a bit differently, and should be between approximately 33-35 ppt (parts per thousand). Currently, my tank is sitting at a specific gravity of about 1.025 (34 ppt), and I check twice a week, adding fresh water as needed, to maintain a specific gravity which suits the marine animals I care for.

Alkalinity or ‘Hardness’- The ability of water or any other liquid solvent to be alkaline refers to its ability to neutralize acid. Typically, a marine invertebrate tank should have a dKH (degrees of Karbonat Haerte, or carbonate hardness) between 7 and 12, depending on the species. Alkalinity is also very important to many marine invertebrates because it relates to the bioavailability of bicarbonate and calcium carbonate (CaCO3); an essential component for the formation of invertebrate ‘skeletons’ and shells. For the marine cephalopod and various corals within my tank, I try to maintain a dKH of about 10-12.  High alkaline water is often referred to as being ‘hard’ while low alkaline water is often referred to as being ‘soft’.

pH – pH is a measurement which relates to the activity and concentration of hydrogen ions [H+]. A substance with a pH below 7 is said to be acidic; a substance with a pH of 7 is said to be neutral; and a substance with a pH above 7 is said to be basic. Natural seawater generally has a basic pH of about 8.2 and captive marine invertebrates tend to tolerate a pH between approximately 8.0 and 8.4. Currently, my tank is fluctuating between a pH of 8.0 and 8.1. Our tap water supply here in CO seems to be slightly acidic; thus requiring several months of slow, monitored introduction of pH ‘buffers’ (such as crushed coral, or aragonite), which contain calcium carbonate and bicarbonate, prior to adding the octopus and other sensitive invertebrates.

Calcium (Ca)- Monitoring the calcium levels in my tank is more important for my stony, hard  bodied corals than for the octopus or other marine critters. However, being that the octopus is native to coral reefs, it is important for me to do my best to mimic its natural environment in every way possible. Typically, reef aquarists aim to keep their calcium (Ca+2 or Ca++, an ion of the element calcium which has given away two of its negatively charged valence electrons) levels between 400-450 ppm. Currently, my tank is sitting at approximately 420 ppm Ca++.

Ammonia (NH3), Nitrite (NO2-) and Nitrate (NO3-)- Fish and other marine animals release ammonia (NH3) as their metabolic waste. Ammonia is also released when organic matter decomposes; and is especially common in home aquariums which are either over stocked or over fed. Ammonia is highly toxic to marine life, and its levels must be monitored carefully when establishing, or ‘cycling’, a marine tank. The natural, biological mechanism for removal of ammonia from marine water is known as the nitrification cycle, pictured below.

A first type of denitrifying bacteria, called nitrosomonas bacteria, breaks down, or oxidizes, the ammonia (NH3) into nitrite (NO2-). Nitrite, which is slightly less toxic than ammonia, is then broken down, or oxidized, by nitrobacter bacteria into nitrate (NO3-). Nitrate, which is slightly less toxic than nitrite, is typically removed from marine systems through one of two ways. First, the incorporation of marine algae and plants to a marine system helps to control nitrate levels; since nitrate acts as a crucial fertilizer for marine flora. Secondly, weekly or bi-weekly removal and replacement of respectively 10-20% of a tanks marine water from the lower column helps to ensure that nitrate levels do not become dangerous to the animals within the tank. A fully cycled (and not over stocked) aquarium should not produce measurable readings of ammonia or nitrite; as denitrifying bacterial cultures should be sufficiently populated to turn over the ammonia waste of the animals.

Oxygen Availability– Reef dwelling octopods and many other marine invertebrates tend to do best in highly oxygenated marine environments. Being that cephalopods are extremely inept as escaping home aquariums; it can be difficult to ensure that they get ample oxygen when sealing the tank entirely to prevent their escape. One of the most important factors of housing a cephalopod is the use of a strong, effective and over-spec protein skimming device. Protein skimmers remove the film of organic matter which can pollute water quality and contribute to the multiplication of unwelcome bacteria and other nuisances. Protein skimmers also introduce billions of tiny bubbles into a swirling mix of the sea water, ‘skimming’ the frothy layer of protein and organic matter from the water before returning it to the system. The introduction air at this rate helps ensure that there is enough gas exchange occurring in the water to maintain adequate oxygen levels. Another way to increase the oxygen levels in an aquarium is to incorporate live flora, which remove CO2 and release Oxygen.

Phosphate levels- Phosphate levels also need to be carefully monitored in a marine environment. Phosphate, similar to ammonia, is a by product of the organisms within the tank and can accumulate to dangerous levels as a result of an over-stocked tank, over feeding, or less than adequate water changes.  Phosphate levels can be controlled by replacing 10-20% of the water frequently, not over feeding ones tank, not over stocking ones tank, and using an effective protein skimmer. Another way I minimize the phosphate in my tank is by introducing ozone to the water  prior to adding new water during water changes. The ozone (O3) generator effectively removes any phosphate and other organic contaminants. High phosphate levels often result in a rapid rise in the amount of nuisance micro algae within a tank.

The octopus aquarium, pictured below, is a 55 gallon tank with approximately 60 pounds of live rock, 50 pounds of marine substrate (aragonite, sand, liverock rubble), a protein skimmer rated for a 100 gallon tank, a hang on the back filter rated for 75 gallons, a canister filter with a UV sterilization bulb rater for a 75 gallon tank, a large bunch of Caulerpa prolifera algae to help control nitrate levels, two circulation pumps in each lower rear corner, several species of live coral, various snails, shrimp and small reef fish (which are expected to be food), a PVC pipe ‘box’ to explore, a 1/2 gallon empty glass jug to hide in, a glass/plastic combination top which is highly secured, a lining of 2 inches of astroturf (which discourages them from climbing any higher) along the top of the tank and a submersible tube which allows Bubba the marmoset monkey to have a 360 degree view of the coral reef and cephalopod tank.

Every pump and intake/outtake nozzle in the tank is covered securely with netting and glued together using nontoxic super glue to prevent the cephalopod from climbing out through the filters or hurting itself in the circulation pumps. One half of the tank has live corals, and relies on two high output T5 bulbs designed to give off the spectrums of light required for coral growth, the other half is unlit during the day and at night time is lit up using a red, nocturnal lamp to allow for viewing of the animal during its active period without causing it undue stress due to high levels of light. The rocks within the tank are anchored to each other to prevent the octopus from smashing itself or breaking the glass if it tries to move rock pieces. 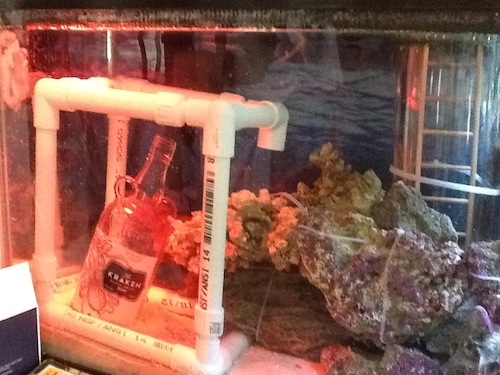 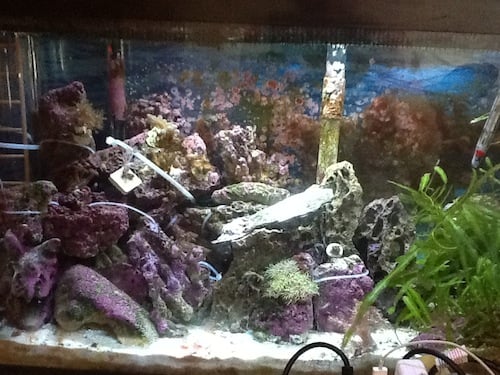 Being that I am many times more familiar with devising training techniques for vertebrates, coming up with similar techniques to study the cognition of this cephalopod has been a bit difficult. Below is a picture of the various objects I plan to begin using after the octopods second week of tank acclimation, which begins tomorrow (Tuesday May 07, 2013). Octopods are highly intelligent, and require a variety of unique stimulus to keep them mentally stimulated and content in their captive environment. Colorful, nontoxic plastic toys are often a quick favorite of these bizarre marine critters, and the jacks have proven quite interesting the the female octopus under my care. The mason jar with the plastic top will be used to see how long the cephalopod takes to master the opening of threaded, twist-top jars. The small vase with the colorful rings will be used before the jar is introduced in order to familiarize the octopod with the texture of glass and begin the association of glass objects with food as well as mentally stimulating exercises. The different colored balls pictured are attached to similarly sized stainless steel rods using various lengths of fishing line. I plan to use different combinations of ball colors, quantities and the length they float above their steel anchors to indicate various activities.

For example, I may begin to use the pink ball and its steel anchor to indicate that feeding time is approaching. A pink and yellow ball combination, for example, could be used to indicate that a training/stimulation exercise is to begin shortly. Two yellow balls, floating at different heights, could be used to indicate that I will attempt to handle the animal. I have not yet decided how exactly I wish to implement these balls as associative learning tools; however, I hope to have provided you with a basic understanding of the way in which I plan to use these balls. Additionally, mirrors can be quite interesting in cephalopod studies. Although we currently have no reason to believe that cephalopods are self aware (like some primates, cetaceans, elephants, pigs and corvids); we still should be studying their reaction to their own reflection. The colorful, unique patterns they display on their skin in response to their own reflection may have some quite important and interesting implications as to how they react to other octopods of the same size, species and sex. 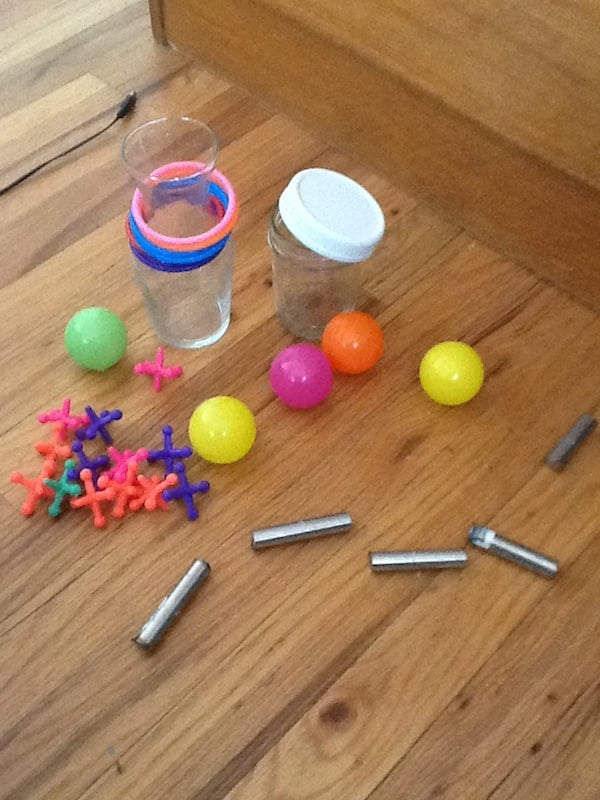 Thanks for reading,  more to come on the training/stimulation progress next week!